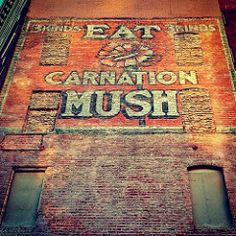 Ghost signs are faded, hand-painted antique advertisements rendered on the exteriors of shops and old office buildings. Interestingly, they may be fragments or whole words such as, “Eat Carnation Mush,” “Edelweiss Beer,” or “Coca-Cola Relieves Fatigue.”

During the industrial revolution, industries began to mass-produce items for sale to a more urban population. Moreover, older, traditional signs disappeared because they were dangerous to passers-by.  This meant advertisers painted on walls because painting there was the cheapest way to get noticed. Consequently, advertisers painted over and on just about everything.  It may seem shocking now,  but they even painted over Georgian or Victorian-era buildings. There were no preservation laws at that time. 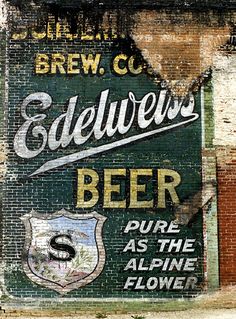 Numerous advertisers paid homeowners a monthly rent for the use of walls. The parties involved signed contracts that lasted many years. American advertisers could paint on the outside of tall city office buildings and apartment blocks – even farm structures. One sign painter illustrated chewing tobacco on 20,000 barns! 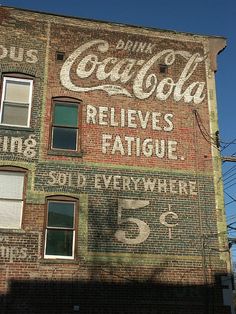 By the 1950s, the new materials of plastic and neon revolutionized the sign industry. In addition, Madison Avenue’s culture of advertising in magazines, radio, television, and printed billboards, offered clients graphic consistency. This meant no more uneven, hand-painted renderings by local painters.

The term, Ghost Signs, emerged in the middle of the 1970s. Subsequently, in 1989 the first book on the subject was written by William Stage: Ghost Signs: Brick Wall Signs in America. Not surprisingly, it involved decades of work that required standing on dumpsters and rooftops to photograph views of what passers-by had once thought unremarkable.

Obviously, the world changed. Ghost signs began to fade. However, since most were too large to remove, they remained. Fortunately, the U.S. has an active preservation movement. Some enthusiasts even hope that these faded memories – these ghosts – will gain a similar cachet as Banksy’s public art. And that could raise property values. Whodathunkit? For now, they are still ghost signs that haunt America – advertising apparitions from the past. 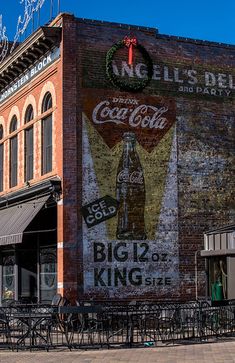 Check out Paxton Signs galleries by using the menu bar, above. Call us for a sign consult at, 970-221-5519.  To place an order, contact us at www.paxtonsigns.com/how-to-order